The six plunger-type wave makers are at the east end of the wave basin and a 7.8×20-m2 wave beach is at the west end at an 11.3º tilt angle. Sidewall-wave dampers along the north/south basin walls are moved upwards/downwards during and between testing to shorten the time interval between tests. A dock and work platform above the wave beach are used for test setup. A 12-ton main carriage moves on a railway system in the x-direction (east-west); a 2 ton sub carriage moves on the rack-gear in the y-direction (south-north); and a turntable attached to the sub-carriage moves on the ring-gear in the turning direction in the xy-plane. The operator control panels for the carriage and wavemaker are on the second floor on the north side of the building.

The wave maker system consists of six wedge-shaped plungers aligned end-to-end with minimal clearance between ends. Each plunger is 1.2 m 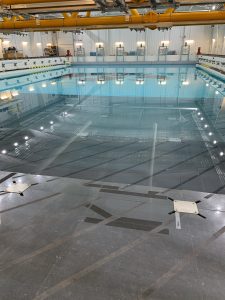 eters high, 3.3 meters wide and 0.8 meters thick and submerged 0.7 meters in calm water. The plunger stroke is adjustable up to 250 mm for plunger frequencies less than 0.62 Hz, where the maximum stroke is restricted to 77.5 mm at the maximum plunger frequency of 2.0 Hz. The wave maker system has two operational modes. The first mode generates regular waves by using pre-set and fixed plunger amplitude and frequency values. The waves are generated in this mode with all six plungers moving simultaneously with the same amplitude and frequency and the same initial phase. The second mode generates irregular waves, where a train of analogue voltage signals of arbitrary waveform are input to each plunger. The wave makers were calibrated to meet the International Maritime Organization standards.